Earlier in the year I did a completely unscientific test to see how effective using a galvanic isolator might be.

I roughed up the surface of two steel plates (to make them more attractive to rust). I didn’t treat them in any other way. The finish was as in Picture 1. 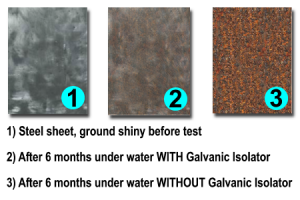 Then I dangled them both into the canal and forgot about them. I did this near the Harecastle tunnel on the T & M, where the water is brown, and (I think) pretty corrosive.

After about 6 months I took the two plates out. Both looked awful until I had washed & dried them. Piccies 2 & 3 are the result.

I can’t make any claims for the results, as I did the test “just for fun”, so the conditions etc., weren’t properly controlled or monitored, but it’s certainly interesting. The rust on No. 3 was far more than I’d expected – but maybe that’s because I intentionally roughed the surfaces of all the plates up to try to speed up the process.

In picture No. 2 – the one protected by the Galvanic Isolator – there was a little rust – but far less than I expected – in fact, you could still see some shiny metal, and the marks made by the grinder. 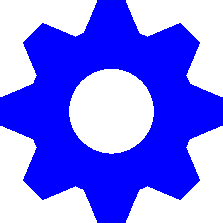